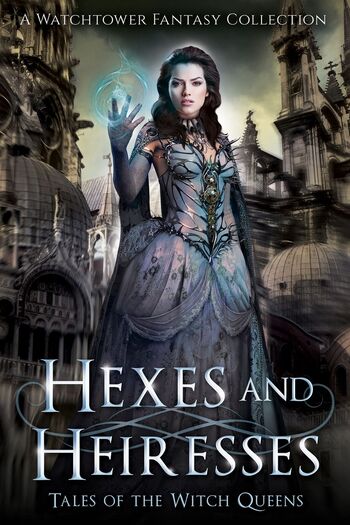 Collection Blurb
A coven is a bond unlike any other.
It is sweeter than life and more absolute than death.
It will grant you blessings beyond your wildest dreams, but will demand your undying loyalty.
Will you join and become immortal, or walk away and be forgotten by time?
Written in these pages are 8 supernatural stories waiting to cast a spell on you. Hexes and Heiresses collects stories from S. K. Gregory, Jordan Eleizabeth, Kat Parrish, Lavinia Roseknight, Mira Kane, Clare Dugmore, Seren Conneeley, Annee Jones
My story in the collection -- Dark Side of the Moon
The Realm of Elenya must always have a Queen. Her celestial magic keeps everyone safe.
But what happens when the current queen and her two daughters are murdered by a mysterious shadowy figure?
Simple farm girl, Estelle, learns she’s part of a centuries-old agreement for the queen to hide away a secret heir. Now she must assume the throne of Elenya, awaken her moon magic and vanquish the enemies that hide in the shadows.
But Estelle has no idea about the etiquette and traditions of Southern Court and stumbles as she gets to grip with a power she never asked for. Her only allies are her childhood best friend, a blacksmith apprentice named Marra, and her new Castellan, Lord Carlyle.
With enemies hiding in the shadow, Estelle will have to figure out how to become something she never imagined, before it’s too late, and she loses her magic and control of the throne forever.